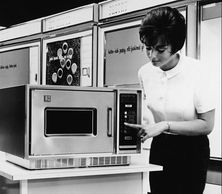 Smart Home Products in the owner and licensor of many top home appliance brands, including the following:

Litton
A pioneer in the development of one of the most popular home appliances of all time, Litton developed the modern residential microwave oven in the late 1960s, transforming a costly and bulky oven in a contemporary and affordable kitchen accessory.

Litton introduced two game changing features that made residential microwave cooking possible.  First, the company developed a magnetron feed feature that enabled the oven to operate empty.  Prior to this innovation, inadvertently operating an oven without something to absorb the microwaves would result in permanent damage to the appliance.

In addition, Litton developed the modern configuration of the residential microwave; the short, wide shape that enabled the oven to fit neatly on a kitchen counter.  This transformed the unwieldy restaurant-style ovens into residential appliances that could fit easily on a countertop or under a cabinet.

Due primarily to these innovations, and a commitment to quality, Litton established itself as a category leader in compact residential microwaves throughout much of the 1970s, 80s and into the 90s.

The Litton name continues to be synonymous with innovation, quality and as a pioneer in the appliance industry. 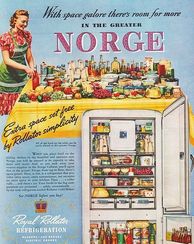 Norge
Originally a division of the auto parts supplier, BorgWarner, Norge introduced its initial selection of appliances to U.S. consumers in the pre-war era of the late 1930s.

The Norge line of washers, water heaters and electric ovens quickly developed a reputation of rugged durability.  But it was Norge’s refrigerator and freezers that set the company apart from the competition.

Notably, Norge was the first freezer manufacturer to offer automatic defrosting, emanating the need to unplug and manually defrost the ice box.  Moreover, Norge was the first to integrate different “food zones” in a refrigerator by incorporating vegetable crispers and meat drawers into many top-selling models. The innovation was copied by many suppliers, and today, all refrigerators utilize drawers and crispers to help keep food at the right temperature.

Norge was purchased by Magic Chef in 1974, and later absorbed by Maytag in 1986.

Although no longer an active brand, Norge has a rich history worth telling.

Chambers
The heritage of the Chambers brand of cooking appliances is truly a piece of American history. The original Chambers Corporation was founded in 1912 by John E. Chambers of Shelbyville, Indiana with one defining mission – to design and build a truly better range for the kitchens of American homes.

Built to last, many Chambers stoves manufactured in the middle of the 20th century are still in operation today. In fact, Chambers stoves are one of the most collectable home appliances in the world due to their unique appearance and reputation as being practically indestructible.

Renowned for its state-of-the-art technology, including proprietary round non-clog burners, adjustable Grillevator broiler, a control panel that tilted knobs up toward the user, O’Keefe established itself in the 1940s and 50s as a leading home appliance brand in post-war America.

O’Keefe was purchased by Magic Chef in 1973 and continued to manufacture and distributed  its prized stoves through the 1980s.
Today O'Keefe & Merritt stoves are still some of the best quality ranges ever made in the USA and their value is growing with time.

With an interesting story to tell and a history of quality and durably, the brand is ready for a resurgence.

à la mode
While directly translated from French to English as “in fashion”, à la mode is better known in North America as a scoop of ice cream accompanying pie or cake.

Regardless of how you view à la mode, that is, as ice cream or fashion, its undeniable culinary connotation sets it apart as a memorable home appliance brand.

Smart Home Products created à la mode as a mark of sophistication and quality, with a hint of French cuisine.

We believe that à la mode can add value to any line of kitchen appliances.